Albuquerque: For many, it is just a stop-over on the way to extreme sports destinations, or more artsy New Mexico cities like Santa Fe and Taos. But ol’ ABQ has a little more going on than just Breaking Bad and hot air balloons (though those are awesome, too). New Mexico’s biggest city is super friendly, a breeze to navigate and makes a great launching point for exploring the rest of the New Mexico and the Southwest.

I give you the feather + fir guide to Albuquerque.

Dubbed by locals and visitors alike as the ‘trendy’ part of town, Nob Hill is a roughly mile-long stretch of the old Route 66 (now Central Ave) that is jam packed with galleries, artist studios, locally-owned boutique shops, up-and-coming restaurants and so much more. If the mix of New Mexico hipsters, long-boarders and artsy types isn’t enough to tip you off, this vibrant neighborhood is easily identified by the neon road arches marking each end. The high style and retro neon signs of the Route 66 era still linger, meshing with bourgeoning micro-breweries and chic new dining and shopping destinations. 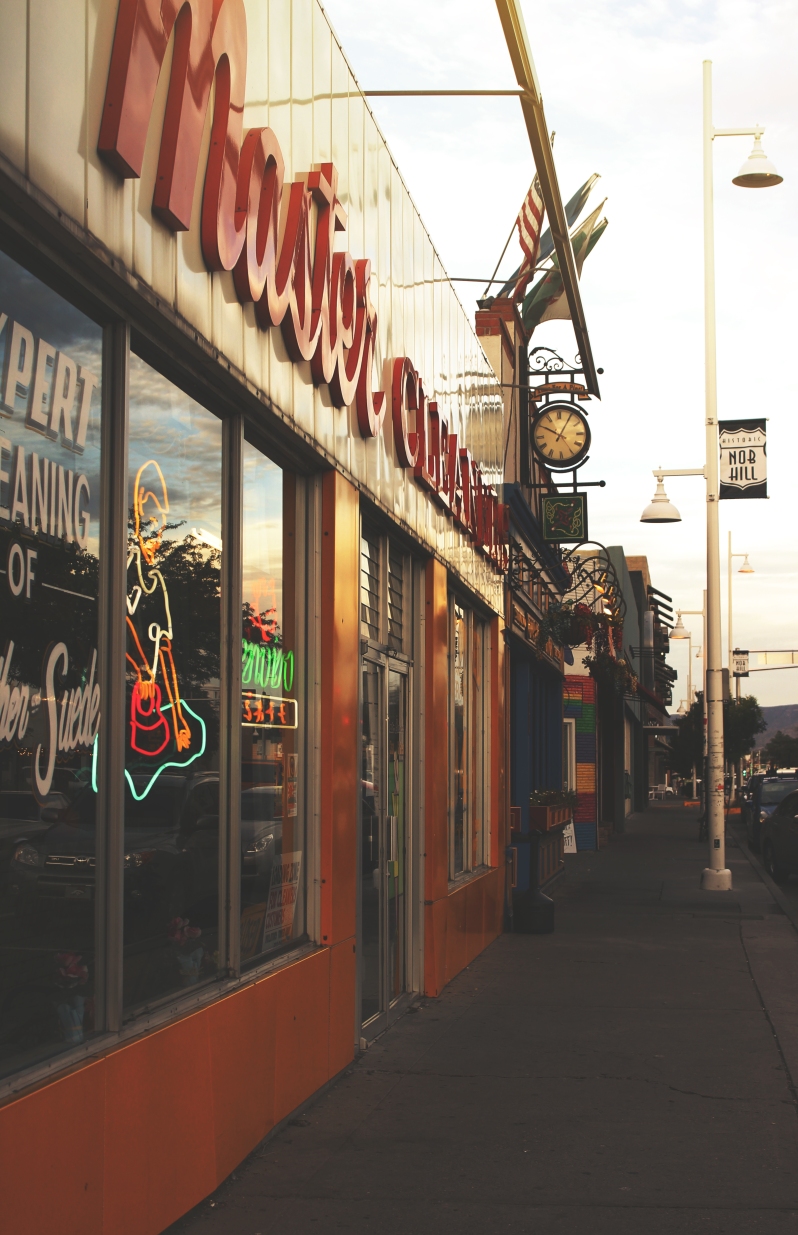 Among my favorite Nob Hill spots is Two Fools Tavern, an unassuming traditional Irish pub with a great menu (and ridiculous portions), friendly bartenders and awesome specials. Two Fools version of Guinness beef stew is to die for. For an awesome burger and some local craft beer, try Bistronomy B2B, just down the street.

Nob Hill Bar & Grill is also a great spot for burgers. In fact, all of the food I tried at this neighborhood bar was amazing, no doubt thanks to award-winning Executive Chef Philip Roybal, who heads up the kitchen here. The service, however, left something to be desired. I recommend sitting at the bar, especially if traveling solo, and perhaps going for lunch or during an off-peak time.

Last but not least, step back in time to the Route 66 era—and have a killer milkshake, while you’re at it—at Model Pharmacy, a classic pharmacy and soda fountain serving up the best banana splits in town.

As someone who went to a ‘Public Ivy’ in the South, I generally think of ‘collegiate’ as being synonymous with Georgian architecture, big columns, quads shaded by old oak trees and a noticeable (if not unavoidable) Greek presence. But this flagship university has a different feel altogether. I enjoyed wandering through the adobe-inspired campus dotted with modern art sculptures.

Sandwiched between Nob Hill and Downtown, this neighborhood has no shortage of good coffee shops, bars and late-night eats. Just across the street from the campus gate is one of the best little coffee shops in the whole city, Winning Coffee Co.  Art from local artists graces the walls. A little independent used book seller sits tucked in the corner. It oozes that liberal college hippy vibe (right up my alley). But even if that’s not your thing, they make a bangin’ breakfast sandwich, green chiles and all. For a true UNM experience, head back across Central Ave to Frontier Restaurant, an Albuquerque tradition, for some bonafide New Mexican food or a famous Frontier sweet roll. They open at 5am, seven days a week, so it’s also a perfect breakfast stop before starting out on an early journey into the hills.

Just a hop, skip and jump from campus is Guava Tree Cafe, a great little Caribbean-inspired sandwich place (they now have a new location in Nob Hill). I love a good Cuban sandwich, and they make the best in the city—maybe in the Southwest—in addition to arepas and other traditional Latin fare. Bonus star for having super sweet staff AND great espresso.

For the breakfast lovers like myself, perhaps my favorite brunch spot in all of Albuquerque is The Grove Cafe & Market. Any place that serves breakfast and brunch all day already gets a gold star in my book, but this place takes it to another level. Delicious sandwiches and box lunches, amazing brunch specialties and locally sourced ingredients all give this bustling cafe the edge over other breakfast joints (in my humble opinion). And don’t even get me started on the coffee.

Other EDo restaurants worth trying are Standard Diner, a feature on Guy Fieri’s ‘Diners, Drive-Ins & Dives,’ and The Artichoke Cafe, a casual fine-dining bistro.

For a bit of history, culture and some more amazing (albeit expensive) art galleries, head to Old Town. This a high traffic area for Albuquerque tourists, so you will find a fair share of gimmicky museums and gift shops, but you can still have an authentic experience. Wander through traditional trading posts and talk with Native silversmiths and jewelry-makers about their turquoise gems. If nothing else, it’s worth fighting the crowds just to visit the San Felipe de Neri Church, a historic Catholic center and one of the oldest surviving buildings in the city. The Albuquerque Museum of Art and History is also well worth a visit. 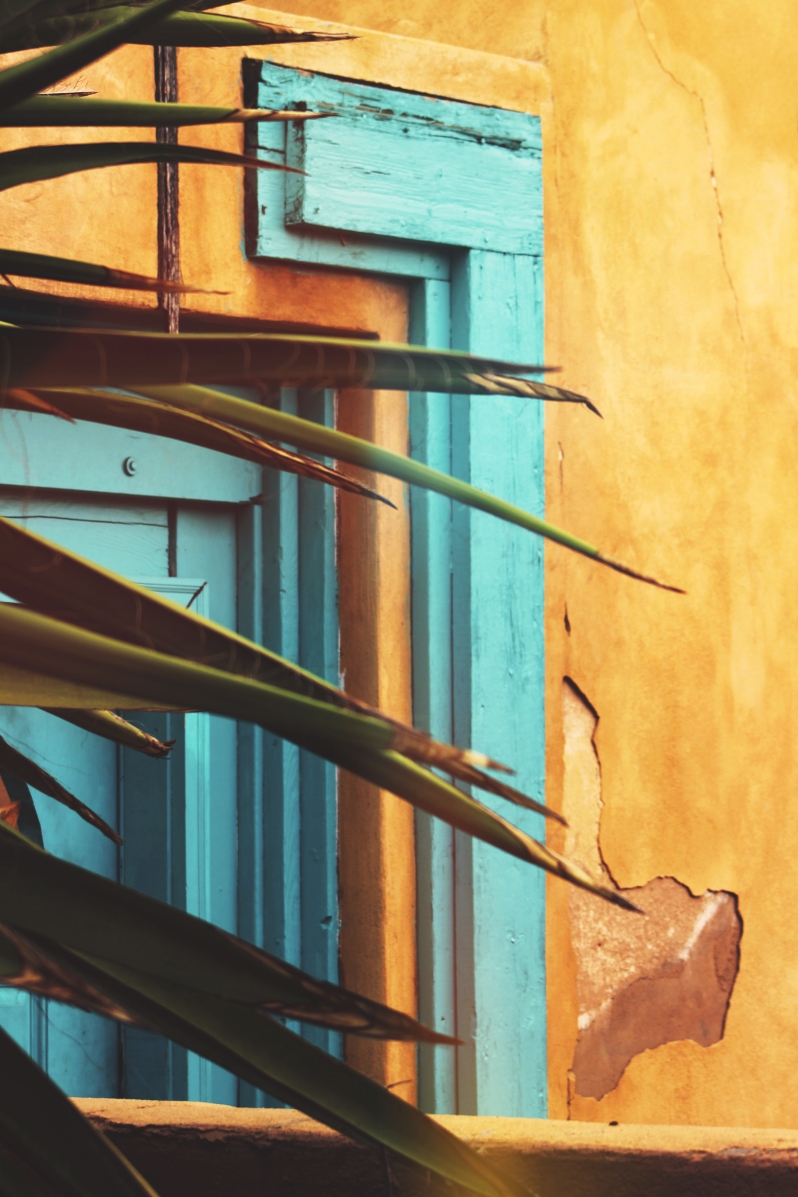 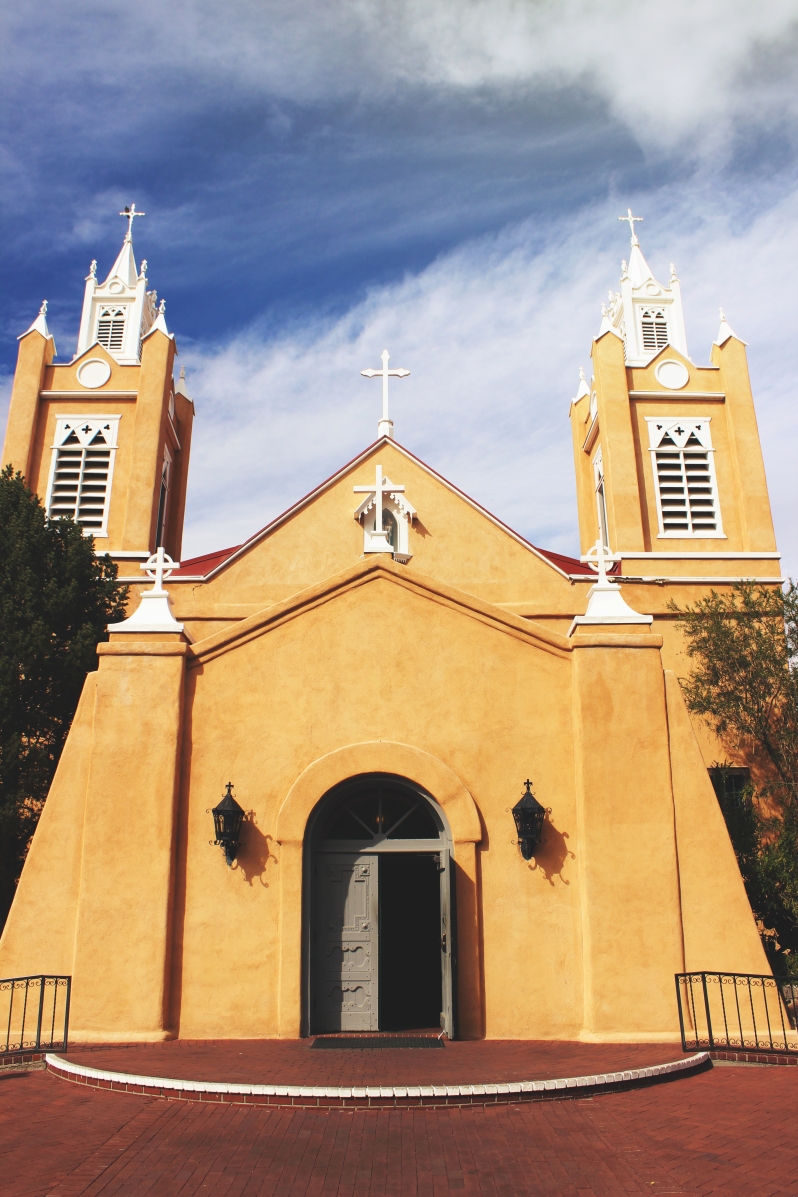 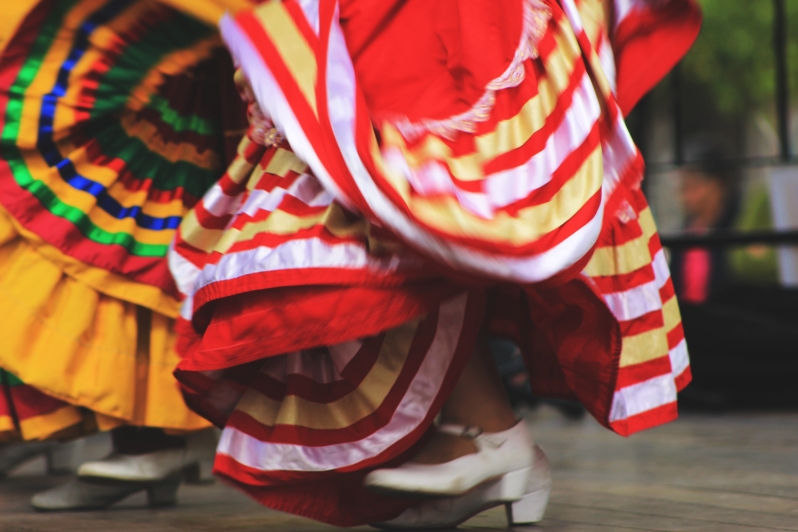 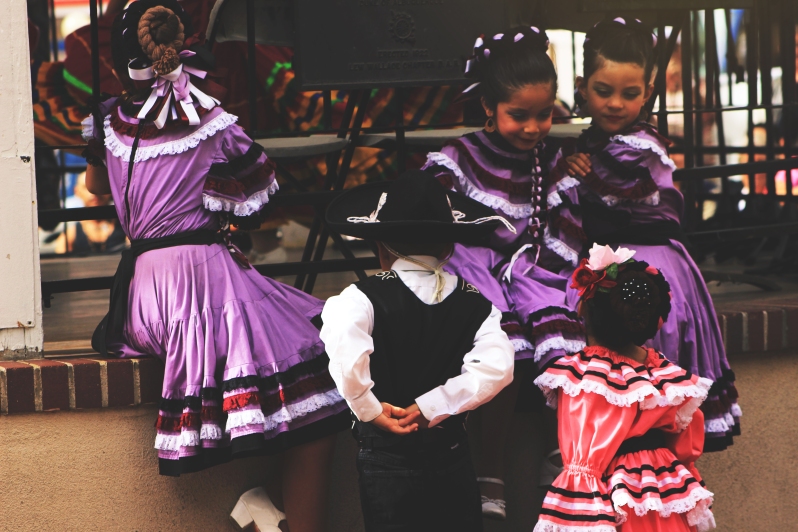 Hungry after exploring? Walk a few short blocks over to Monroe’s, a New Mexican diner and Albuquerque main-stay.  If you’re looking for something a little lighter, try nearby Vinaigrette, a bright, open spot that specializes in gourmet salads. I had a salad with grilled pear and duck confit, paired with one of the local beers they have on tap. They also have a beautiful patio space on which to enjoy the glorious Southwest sunshine.

Right across the street from Vinaigrette is Duran Central Pharmacy. Over the years, the soda fountain in this family-owned institution has evolved from a simple pharmacy lunch counter to a full-blown restaurant operation. Serving up New Mexican staples with quirky flair, this spot is frequented by locals.

If you’re looking for a dinner splurge, there’s no better place than Antiquity Restaurant, a fine-dining steak and seafood restaurant right in the heart of Old Town. Fantastic food and and phenomenal wine list. This is great place for a romantic date or an extra-special occasion.

Other Old Town establishments of note include Golden Crown Panaderia, where they are famous for their biscochitos, and the French bistro La Crêpe Michel.

One of the biggest hot air balloon festivals in the world, the Albuquerque International Balloon Fiesta is ABQ’s premier event, drawing thousands of people every year. All I will say about this is that they have a permanent Balloon Fiesta Park, which includes a hot air balloon museum. I’ll let the photos do the rest of the talking. 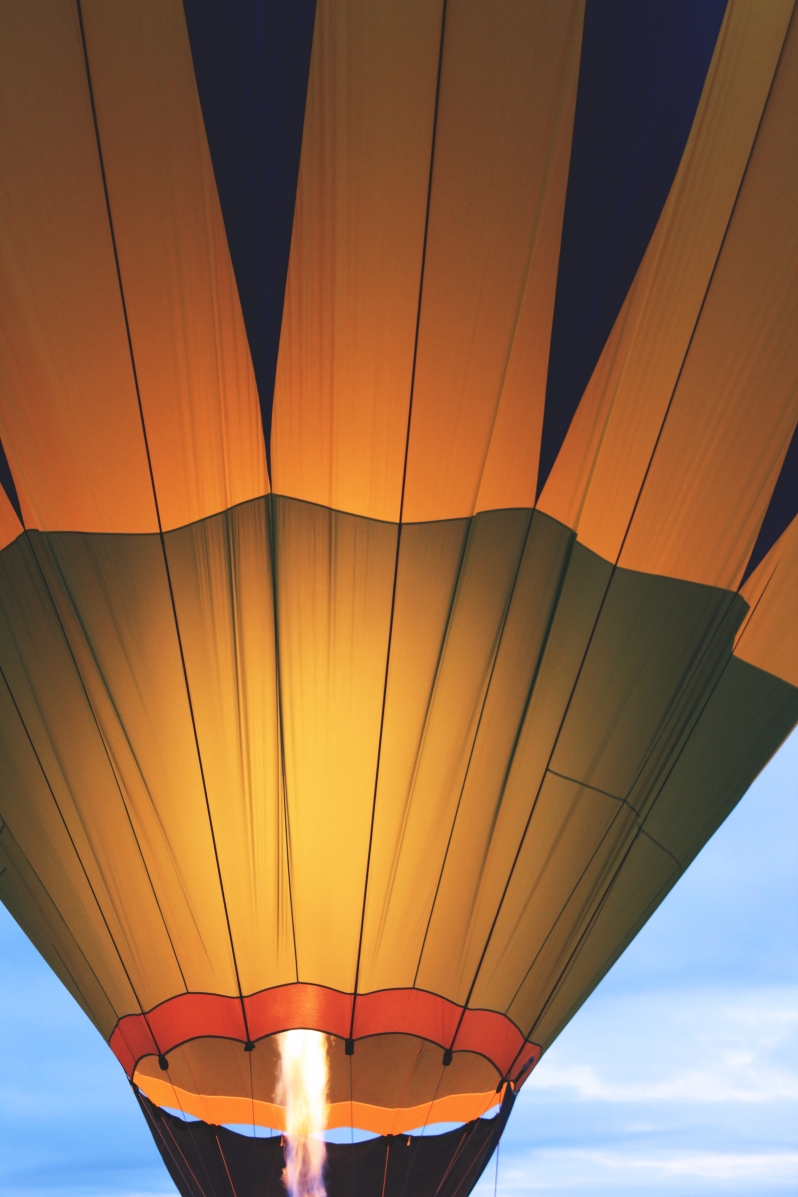 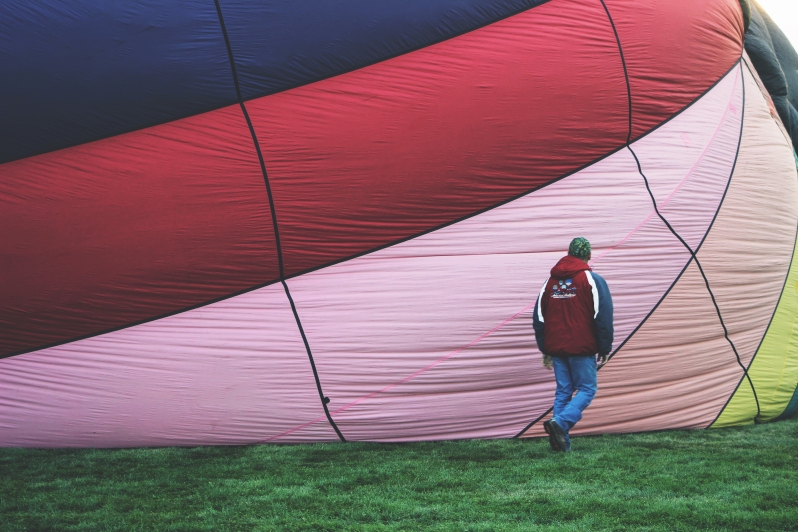 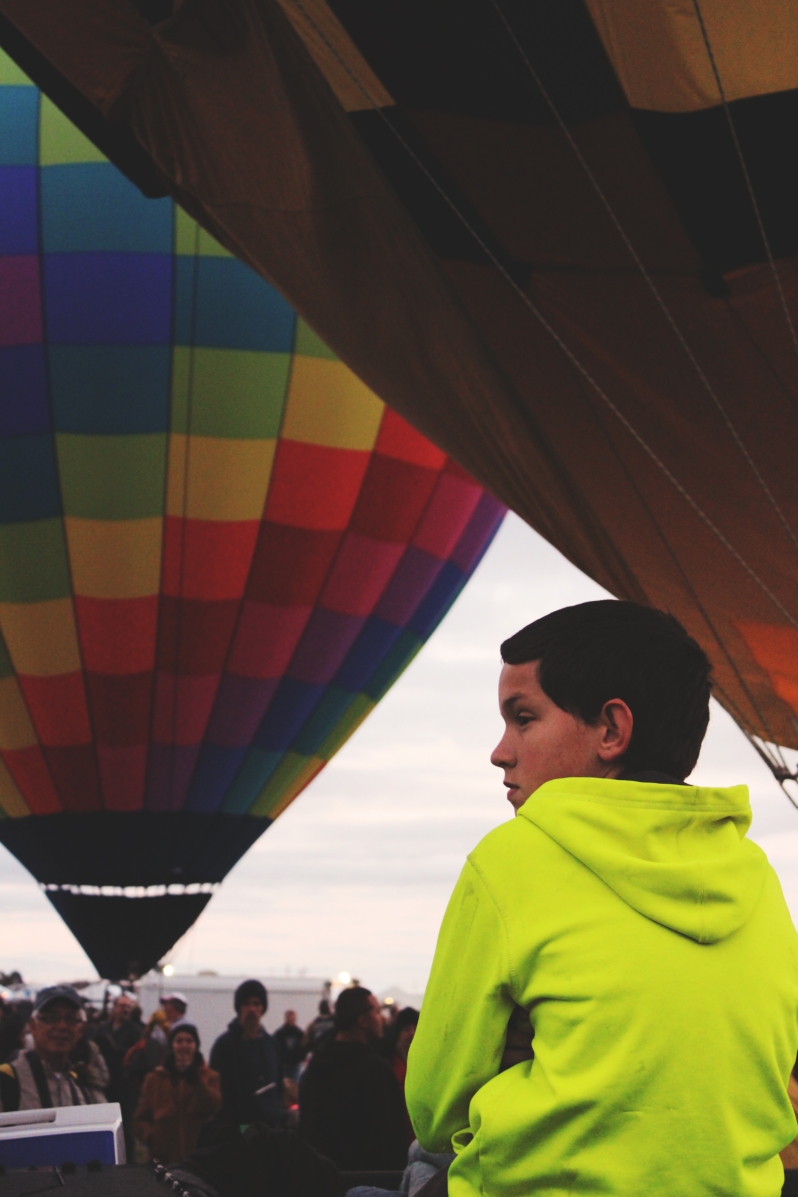 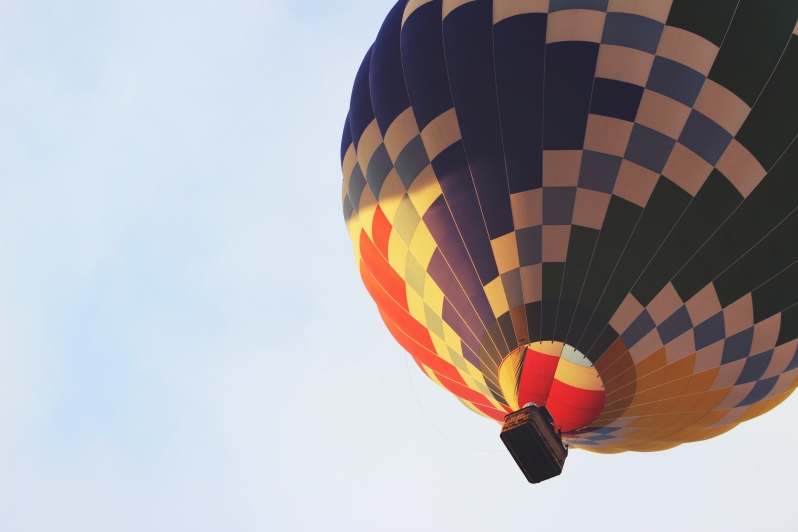 While you’re in the North Valley, see what’s on the seasonal menu at Farm & Table. Their philosophy includes locally-sourced ingredients and celebrating community. Food doesn’t get much fresher than straight out of the ground right behind the restaurant.

Situated just west of Albuquerque are the majestic Sandia Mountains. For a view of the city from over 10,600 feet up, you can take the Sandia Peak Tramway, an aerial tram that ascends almost 4,000 feet in about 20 minutes, up the steep west side of the mountain. You can also drive all the way to the top via the Sandia Crest Scenic Byway, a winding off-shoot of the Turquoise Trail National Scenic Byway ending at the Visitor’s Center parking lot. If you’re a hiker, there are a handful of routes that connect to the Tramway Trail, which you can take to the top. There are trailheads at various points all along the byway, from easy hikes, like the Boundary Trail (4 miles round trip), to much more strenuous climbs. 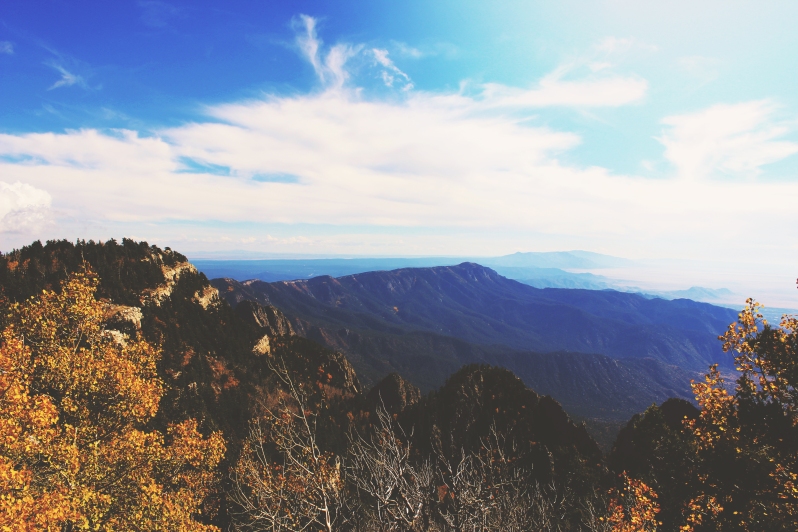 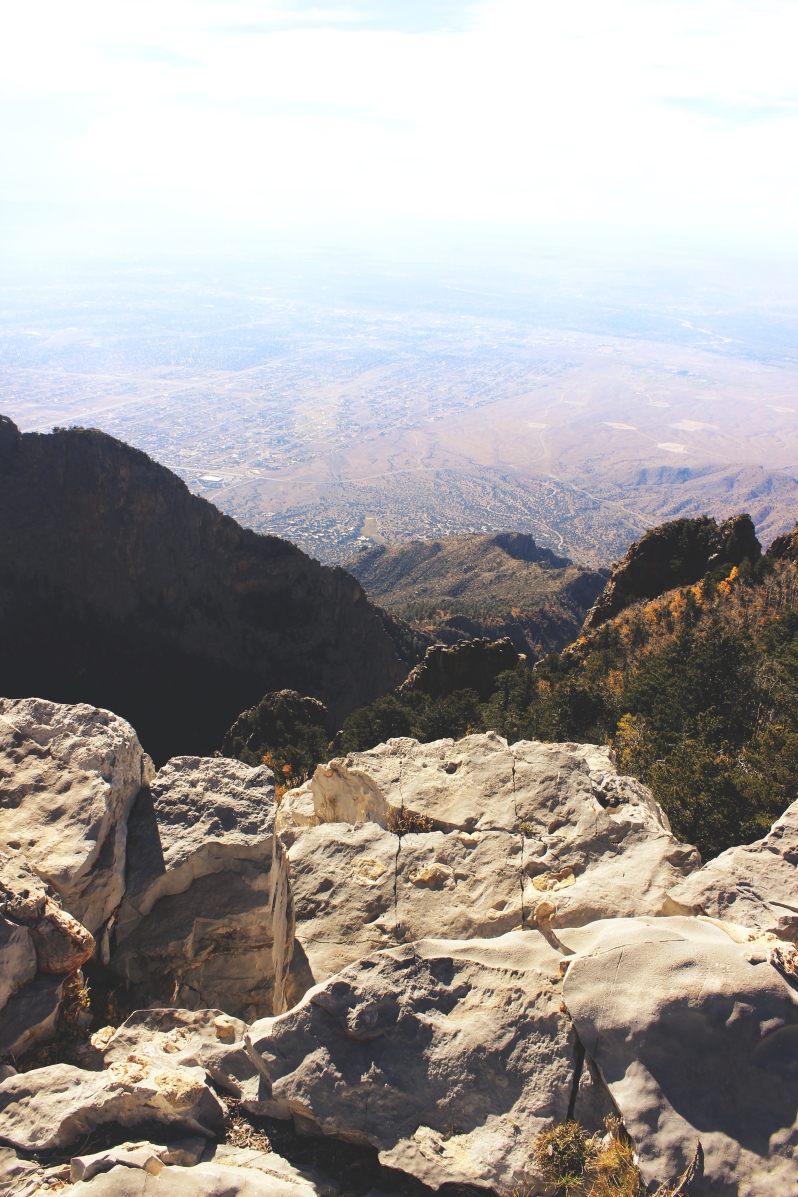 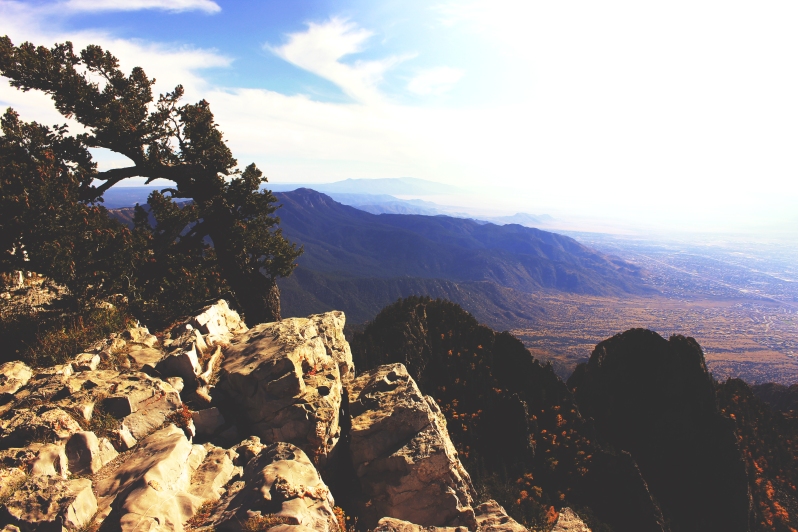 For Your Inner Heisenberg

The Candy Lady
Debbie Hall is the proprietor and confectioner at this pillar of Old Town enterprise. Her more recent claim to fame is creating the rock-candy prop featured as Walter White’s ‘Blue Sky’ meth in Breaking Bad. This is a must for BB fanatics.

Dog House Drive In
Sample the best chili cheese dog in town at this classic, ‘no-frills’ take-out spot specializing in foot-long hot dogs slathered in red chili. Breaking Bad fans are sure to recognize this relic of an eatery by the giant neon dachshund perched on top.

Don’t forget to explore this City Guide on Pinterest, too.

Went color hunting on the Atlanta BeltLine today. More on the blog. #atlanta #ATL #beltlineatl #beltlineart
Been by the blog lately? Take a peek... there's new content all the time. Link in profile. #creativeadventures
Out and about in the city. #ATL #atlanta
It's FINALLY the weekend, and this girl is headed to NC. #carolina Vintage pennant found at one of my faves, @thisisbrickandmortar.